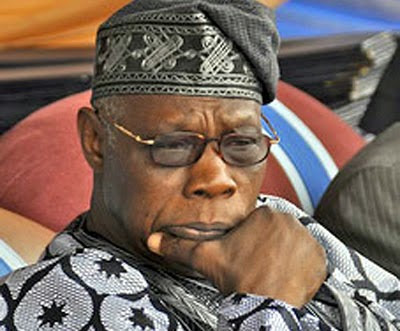 When the Iyalode of Yoruba land, Chief Alaba Lawson, led a delegation of South-West women leaders on a visit to his Hilltop residence in Abeokuta, Former President Obasanjo told them that President Jonathan had dug the country into a deep hole within the last 8 years..
The 78-year-old former Pres. said due to the mismanagement of the country in the last eight years, the incoming administration of the President-elect, Muhammadu Buhari, should be prepared to face the bad situation that was left behind by President Jonathan.
He said: “The country had been poorly managed in the last eight years and it would take some
time for Buhari’s government to correct the anomalies. But I want to tell him not to be frightened.”He urged Nigerians to be really patient with the incoming administration because the damage that had been done to the country in the last eight years could not be corrected overnight.
“What I would say is that we should all put our minds at rest. He (Buhari) is someone that will perform but we must exercise patience because what has been destroyed for eight years cannot be undone overnight.
But like the Chinese proverb which says the journey of a thousand miles starts with a step, it is not only the first step (that matters) but the first step in the right direction because if you take a wrong step, you’re not likely to get to the destination,” he said.
He further said:
“When I came in 1999, there was no fuel and power. The situation was like this and I thought we have put that one behind us,” he stressed, even as he expressed confidence in the ability of Buhari to surmount the hurdle.
The man that is coming on board has a lot of experience in terms of governance. He is not a novice in governance having ruled the country as a military Head of State from 1983 to 1985. Nigerians need to exercise patience because what has been destroyed in eight years cannot be rebuilt in a day,” Obasanjo maintained.Recalling his years as military Head of State between 1976 and 1979, Obasanjo said he worked closely with Buhari and that their association produced great results.
Further urging Nigerians to pray for Buhari, Obasanjo said the president-elect needs the cooperation of Nigerians in order to put the country on the right footing.

“Let’s give him time. Let’s pray for him and let’s cooperate with him. We are all concerned about the present situation of Nigeria. The expectation is very high but at the same time, there is a lot of goodwill internally and externally for the incoming government.
Once the incoming administration realises this and takes every step, particularly in the first three months when people will be watching and counting, I think for me, we will get there,” the former Peoples Democratic Party leader said.

Obasanjo warned Buhari not to take Nigerians for granted as he called on him to always be honest in his dealing with the populace.
He said that he believed that Buhari will take Nigeria to great heights.
“God has provided a new opportunity for Nigeria and Nigerians and I believe God does not make mistakes. There are two things I believe the incoming President appreciates; one is that he knows that the expectations of Nigerians are high and two, that he should not be frightened by the situation on the ground.”
Source Punch.

Cancel reply
Airtel Nigeria To Shutdown Due to Fuel Scarcity.
Fuel scarcity forces police to cut back patrols.
To Top