Connect with us
48
SHARES
FacebookTwitterSubscribe 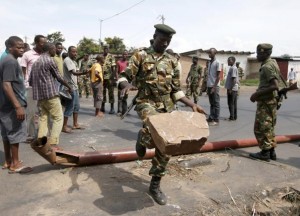 About a hundred protesters took to the streets of Bujumbura on Saturday against Burundian President Pierre Nkurunziza’s decision to seek a third term, a day after he returned to the capital following a failed coup. Reuters was there:

The east African nation was plunged into deep crisis after Nkurunziza announced he was running for another five-year term, with clashes between police an protesters stirring memories of an ethnically driven civil war that ended just a decade ago. “A lot of us citizens do not want the constitution to be violated as he is not allowed to lead for the third term…. We will demonstrate until he steps down,” said Nduwimana Belamie, one of the protesters.

Opponents say Nkurunziza’s decision violates the constitution and the Arusha deal to end the war that pitted rebel groups of the majority Hutu population, including one led by Nkurunziza, against the army which was then commanded by minority Tutsis. The army is now mixed and has absorbed rival factions, but the coup attempt exposed divisions.

The fate of General Godefroid Niyombare, who had announced the president’s ouster on Wednesday, was still not clear on Saturday, after loyalist troops calmed the streets of the capital on Friday following clashes between the two factions on Thursday. A Reuters photographer saw the army clearing barricades set up by protesters in some areas of the capital.

48
SHARES
FacebookTwitterSubscribe
Related Topics:
Up Next