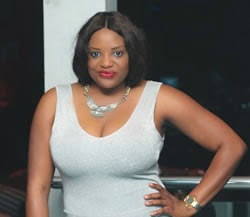 Funke Adesiyan, a popular Yoruba actress didn’t go home to sulk after losing in the last election. The reverse is just the case as she told Saturday Beats on the telephone earlier in the week.
Funke, who fought for a legislative seat in Oyo State under the Peoples Democratic Party, said she is not feeling bad at all.

“I threw a party immediately after the election. Didn’t you hear about it? Ah! I don’t feel bad at all. I threw a big bash where I invited my fans and friends to come and celebrate with me. There was no need for me to feel bad in any way,” she said.

The actress said she is going back to her acting career and nothing is going to dampen her mood.