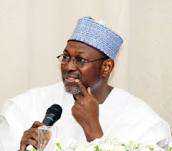 A Federal High Court sitting in Warri, Delta
State, has, therefore, fixed February 10, to
commence contempt of court proceedings
against the Chairman of the Independent
National Electoral Commission (INEC),
Professor Attahiru Jega, after he was charged with refusal to execute a court judgment.
The court had, on October 31, 2014, delivered
a judgment, ordering INEC to restore forthwith,
Ughelli South 1 and Isoko North 1 constituencies, which were, in 1998, kept from public knowledge by the electoral umpire.

INEC, however, filed for a stay of execution
against the judgment in the same court.
While dismissing the application on February
3, the presiding judge, Justice Shittu
Abubakar, contended that INEC had crossed
its bounds by deliberately delaying the
implementation of the ruling of the court.

Counsel for the plaintiffs, Chief Efe Akpofure, described the quashing of INEC’s application
for stay of execution as a good judgment.

According to him, since the ruling had to do
with the restoration of state constituencies, in
order to participate in the February 28
elections, the case deserved an accelerated
implementation.

Counsel for INEC, Efa Oka, however said that
INEC was under no obligation to execute the
judgment, since the application for stay of
execution had been quashed.